Peggy's boat cellar is prone to tidal flooding. It also has a freshwater stream running through it. Since 2009 we have been recording the temperature and relative humidity (RH, in %) of the air in the cellar. There are plenty of resources on the www that neatly explain what RH is, but for the purposes of this blog its only necessary to know that it's RH that influences whether objects get damp or dry out.
Above 60% RH wooden objects are subject to increased risk of attack from fungi such as 'rot', and the risk grows as the RH rises. Wood-boring insects such as furniture beetle (woodworm) also like damp. In fact just about every natural decay process you can think of is helped along by high RH.
Iron, as we all know, rusts quickly when it is wet, and the wetter it gets, the faster it rusts. It'll keep on corroding until there is no metal left at all. If the iron is salty the corrosion will be more rapid and serious. The rate at which iron rusts is directly related to RH: the lower the RH the slower the corrosion. The only way to stop iron from rusting is to lower the RH of the surrounding atmosphere. In the case of iron contaminated with sea salt, one would have to lower the RH to levels similar to those you'd find in a desert to stop it rusting. This is quite a challenge! Very dry environments are not, unfortunately, very good for wooden objects.
The RH in the boat cellar is consistently 85-99%. This isn't good, obviously. Incidentally, we are interested to know why some of the grosser forms of fungal attack such as dry and wet rot are not more prevalent in the boat and building; we suspect the low temperature (8-12 degrees C throughout the year) may be a factor, but it's a question for future research. Aside from the kind of decay you can see and easily recognise however there remains the problem of more insidious decay we can't so easily see, and above all that of iron corrosion. 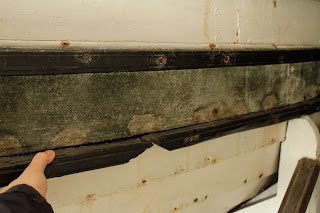 As the nails holding Peggy together rust they leach acid into the timber, weakening and destroying it. The evidence for this is all over the boat in the form of brown stains and circles. The boat would theoretically, eventually collapse, though this is not imminent. Some of the fixings are failing, nonetheless. 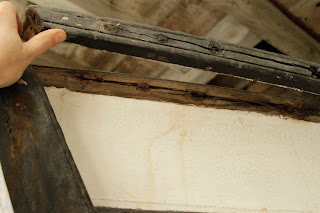 Posted by Christopher Weeks ACR at 12:19 No comments:

What is this blog about?

Peggy is a Manx yacht. In fact, at two hundred and twenty two years she is one of the oldest yachts in the world. We know a lot about her because, remarkably, she is still in the cellar of the boat house built for her in Castletown, Isle of Man, in the late 18th century by her owner, George Quayle. George was a notable character on the island and in his early years, something of a rake. His correspondence is preserved in the Manx National Archive, and in it he describes the building of the boat and boat house, and his adventures at sea aboard the Peggy.
Peggy is astonishingly well-preserved and remains substantially unaltered since Quayle's day. The list of her unique attributes is long and quite incredible. If you would like to know more about this and her historical significance, a good place to start is with her entry on the UK National Historic Ships Register (http://www.nationalhistoricships.org.uk/register/1125/peggy). She also has an entry on Wikipedia (http://en.wikipedia.org/wiki/Peggy_of_Castletown).

Since the late 1930's Peggy has been owned and looked after by the Manx Government. The heritage agency on the island is Manx National Heritage, which has maintained the boat house with Peggy in it as a visitor attraction for over sixty years. When the Nautical Museum, as it came to be called, was set up Peggy was righted (she had been lying on her side for 150 years). A small number of her strakes (hull timbers) were replaced, along with her keel and rudder. She was then painted. This is how she remains.

In George Quayle's lifetime, the boat house opened on to a tidal dock surrounded by a curtain wall (the wall remains but the dock was filled in during the 19th century). In the wall were a pair of gates, the remains of which can still be seen today from the quay on the opposite side of the water. These gave Peggy access to the harbour. Windlasses (winding drums that also survive) were used to haul Peggy out of the dock and into the cellar. Peggy was never intended to be far from the water, and accordingly the cellar in which she sits is very wet. Because of this, and notwithstanding her remarkable state of preservation, Peggy has suffered many of the indignities of ageing common to other wet 200 year old objects made of timber and iron nails. I'll use subsequent posts to described a few of these and their effects on the boat.
Posted by Christopher Weeks ACR at 11:15 No comments: