Just before Covid struck I was fortunate to be invited to lend my expertise to the analysis of this very fine boat by Paul Croft of Lincoln Conservation: http://www.lincolnconservation.co.uk/projects/the-lady-guilford-scottish-maritime-museum/

Posted by Christopher Weeks ACR at 16:30 No comments:

Posted by Christopher Weeks ACR at 12:13 No comments:

Email ThisBlogThis!Share to TwitterShare to FacebookShare to Pinterest
Labels: Made with Rhino 7

This week, Museum Directors are on my mind. Manx National Heritage, the national heritage agency of the Isle of Man, and my employer, has a new director, Mrs Connie Lovel. Connie has got off to a flying start and she has shown a great interest in Peggy and the George Quayle Legacy Project. One of Connie's obvious strengths is a forensic eye for detail, and is the prompt for this post.

The other museum director I have been thinking of is this man, Dr Basil Greenhill, Director of the National Maritime Museum, Greenwich (now Royal Museums Greenwich) from 1967 to 1983. 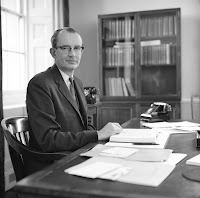 Greenhill served in the navy during the war. He was a career diplomat in Pakistan before his appointment to the NMM where his tenure was successful in many ways and garnished his reputation as "the foremost figure in the world of maritime museums" (Guardian UK obituary, Thursday 8th May 2003). He was also a formidable autocrat.

As a boy, Greenhill had been obsessed with sailing. He'd seen the drawings of Peggy, commissioned by the Society for Nautical Research, amongst others in an exhibition at the Science Museum in South Kensington in the 1930's. Thirty years later, when the opportunity arose to visit Peggy at the invitation of Connie's predecessor, Basil Megaw, he took it. His articles on Peggy (see my previous post, 'This is it') from that period have, until recently, remained the primary source on Peggy and her history.

Greenhill reconstructed the story of the Quayle brothers' boats through researching the Bridge House Papers in the Manx National Heritage Library & Archive. His articles propose this sequence of events:

1. The 1789 boat mentioned in George Quayle's letters was called Neptune and is now lost.

3. A second, smaller boat, also called Peggy, was built in 1793. This boat was impounded for contraband off Conway in Wales later that decade.

His arguments were made with what might be considered characteristic authority. Unfortunately he rarely referenced individual documents and his account is extremely hard to reconcile with what we now know. At the heart of some of these problems is the Admiralty Licence of 1793.

This document was carried by Quayle on board Peggy, folded in a tightly-sealed, weatherproof tin. It was issued on behalf of the Lord High Admiral of Great Britain and Ireland, and permits Peggy to pass unmolested by the British navy. It lists her armament of six swivel guns as well as fowling pieces; these are the guns found with Peggy in her cellar in the 1930's. Her dimensions are listed as:

Now, unfortunately these dimensions do not tally with those of Peggy (twenty six 6/12 Feet long, Seven 8/12 Feet broad). This did not go unnoticed by Mrs Lovel, and it is upon this detail that Greenhill built his 'two Peggys' argument. But could there be another explanation for the discrepancy?

None of these observations neatly or definitively settle the question of Peggy's length as detailed in the Admiralty license, but they do come very close indeed to doing so. Furthermore, Greenhill's argument that the Peggy mentioned in the license is not the one that has come down to us does not fit with the physical evidence on the boat itself. Close investigation in the last five years has revealed gun mounts in the original mooring bits which fit the six swivels guns found with the boat. Our Peggy is indeed therefore the boat detailed in the Admiralty license of 1793.

Lastly, on the subject of 'little Neptune'. Basil Greenhill did not believe the surviving Peggy was the boat detailed in George Quayle's 1789 account book. However, recent paint analysis of Peggy and the boat house clearly shows that boat and boat house were decorated in matching paint schemes from the same paint pot. Go figure, as the Americans say....

Historical knowledge is always subject to change and re-interpretation. New evidence comes to light that demands to be reconciled with narratives that have been accepted for decades. The story of the Quayle brothers' boats is in a state of flux at the moment that only more profound study of the archive will clarify.

Posted by Christopher Weeks ACR at 12:27 No comments:

Yesterday I finally finished the CAD drawing of Peggy. If you would like to see a version of the model in 3D, please click this link which will take you it on the Manx National Heritage Sketchfab page.
There have been, I admit, some moments when, like the proverbial grape, I have "let out a little whine" of frustration over the quantity of work this has amounted to. But it's a fact that drawing Peggy in this way has really forced me to look at her properly. Without this level of study we can't hope to understand the form, function and provenance of each frame, stay, cleat and fixing. And it's vital that we do if we are to explain how she looked and how she sailed.
Using what I have learnt has enabled me to separate the two versions ('Peggies'?) - the original, 'racing' Peggy which was fitted with sliding keels and oar ports with rowlocks, and the 1802 'safe' Peggy with raised gunwales and no fancy contraptions.
In the next two pictures I have arranged them next to one another so that the differences can, at last, be easily appreciated. The position of the masts in the 1789 version is rather conjectural at the moment and will be subject to revision in due course.
The paint colours are a basic representation of her appearance in 1789 and 1802 respectively. The scarlet red you can see peeping out over the gunwales in the 1789 version is not a mistake!
In 1950 you may recall, Peggy was restored for public viewing after 150 years of neglect. Scant records were kept of this intervention so we have never been certain exactly how many of her timbers were replaced at that time. Using the 3D drawing it is now quite easy to see those interventions. I have highlighted them in blue in the photo below. The photo shows both the underside and the view from the top of the 1802 Peggy.
Posted by Christopher Weeks ACR at 17:10 No comments:

I'm making final adjustments and additions to the CAD drawing of Peggy. This includes identifying the remains of the 1789 Peggy and separating them from the 1802 modifications. This has been quite a headache because George Quayle's conversion of Peggy to the form we see today resulted in hundreds of changes.  Inside the boat for instance there's a veritable forest of frames; using the CAD drawing it is much easier to see patterns and correspondences in these and to categorise them to either period. Easier - but not easy.


Posted by Christopher Weeks ACR at 18:36 No comments:

Every day I have been adding to, adjusting and correcting my CAD drawing of Peggy. I have been concentrating wholly on the interior so far.

I reached a major milestone today when I finished drawing every timber on the inside of the boat and was able to put the results together with the image of the hull exterior made for me in 2012 by Martin Cooper (then of Conservation Technologies, Liverpool and now Lynton Lasers, Wilmslow, Cheshire).

Posted by Christopher Weeks ACR at 17:50 No comments:

Here on the Isle of Man controls to contain the spread of the coronavirus have been pretty draconian and I, in common with so many others, am forced to work from home. Turning the situation to my advantage I am taking the opportunity to complete the CAD (computer aided design) drawing of Peggy. The drawing is in three dimensions and will show each individual timber from which Peggy is made. Working from 3D scans of the boat each piece has to be drawn with lines which can then be used to create a virtual image of it.

All this is very laborious, and until the pandemic hit us I was struggling to find the time to complete it. But why, you may ask, am I bothering?
The CAD model of Peggy will be accurate (if somewhat rationalised) and it will be useful for two really important pieces of work. One is the reconstruction of Peggy's rig and her original form (and original rig too). We still don't really know much about this. The second piece of work is to explore how she may have handled. For this we can put the CAD model in a simulation.
Posted by Christopher Weeks ACR at 11:53 No comments: